Rocklahoma 2018 was bad ass again this year and Rockin Hog Media were out on full force! This years lineup was jam-packed with some of the greatest bands to walk the planet including Pop Evil, Diamond Head, Powerman 500, and of course Godsmack just to name a few.

Saturday, May 25 Paul Ferguson a.k.a Ferg, Lainie McCurdy, Kaylan Mitchum, and myself ( Ken McClary ) from Rockin Hog Media spent the entire day backstage. Lots of fresh new talent making their way thought the media tent this year along with some seasoned vets and we had the opportunity to spend some time with just about everyone!

Ferg put together an outstanding list of interviews this year and our day started of with Sean Harris and the legendary Brian Tatler of Diamond Head. For all of you living under a brigbe Diamond Head are the OG’s of Rock! Formed in 1976, Diamond Head has played stages allover Europe asking the masses “AM I EVIL” and has recently blessed the USA with their rock presence. Most metal bands including Metallica and Megadeth credit these guys for being a major influence to their music and seeing them live at Rocklahoma just confirms why they are considered to be one of the greatest to ever hit the stage!

We also had the pleasure to hang out with Spider One from Powerman 500 backstage at Rocklahoma. Founded in the early 90s, Powerman 5000 has released nine kick ass albums over the years that include huge hits like “When Worlds Collide”, “Nobody’s Real”, “David Fucking Bowie” and one of my new favs “Sid Vicious in a Dress” so amazing. Thanks for taking the time to chill with us and sign our stuff Spider One! We hope to see you at Rocklahoma 2019 because you guys put on a killer show and really know how to throw down!

Matt Fisher and Derrick Shipp of Shaman’s Harvest stopped by Backstage at Rocklahome 2018 and these guys truly define rock-n-roll. Shaman’s Harvest was formed in Jefferson City, Missouri back in 1996 by Matt, Nathan “Drake” Hunt, and Josh Hamler and lucky for us they brought on Rerrick back in 2014 because that dude can shred. Some of their hit songs include “Ten Million Voices” and “The Devil in Our Wake” but we all go nuts when we hear “In Chains”. Their new CD “Red Hands Black Deeds” is bad ass so make sure to check it out. I had the pleasure to be front row at Rocklahoma 2018 and can honestly say I am a bigger fan now (if that’s even possible) than before!

One of the best interviews of the day was with Chris Brooks and Matt Brooks from Like a Storm. Two really down to earth guys just doing what they love, making kick ass music! They are on tour right now with their brother Kent Brooks and band mate Zach Wood and rocked hard at Rocklahoma 2018. To catch some of you up, Like A Storm is a hard rock band from New Zealand and have done tours with some huge names like Korn, Shinedown, Creed, Puddle of Mudd, Staind, and many others, as well as touring North America extensively as a headline act. Chris said they will be in Little Rock, AR playing with Shinedown, Godsmack, and Red Sun Rising pushing Like A Storm’s new album ‘Catacombs’ and their new hit “The Devil Inside” so make sure you don’t miss it!

Something cool everywhere you look at Rocklahoma 2018 so we know we missed a ton of photo opportunities but sometimes you need to put the camera away and enjoy the show! Here is a collection of pics taken over the weekend.

The Butcher Babies are a mix of heavy metal, punk, and thrash like you never heard before. Originated in Los Angeles, California back on 2010, frontwomen Heidi Shepherd and Carla Harvey along with Henry (Amen) Flury, Jason Klein, and Chase Brickenden make up the band. They were one of the most intense shows at Rocklahoma 2018 and hopefully they make a trip back next year because they are out of this world.

Bad ass Metal band from Pryor, OK with one goal in life and that is to rock the world stages. Chris Bishop, Joey Forrister, Jordan Ketcher, Damien Lee, and Joshua Dotson are the one who make this band great and I encourage you to check them out on ReverbNation.com/StanleysRevenge

RENEGADES is a newly formed melodic metalcore band making waves in their local Kansas City scene. Had the chance to hang out these guys backstage at Rocklahoma and they are really a solid crew. They are on tour right now so if you can I would encourage you to get out to see them live. Visit their website for tour dates and some some streaming music links.

Out And About Rocklahoma 2018

Overall we interviewed 20+ bands and had so much fun meeting with all of you at Rocklahoma. Ferg is working on the video and we will be adding it to this article soon so keep an eye out for that. What to give a big shout out to everyone who stopped by to take pictures with us, let us get into your business a bit, and sighed our stuff. Great meeting all of you and even better getting to see you guys on stage tearing it up, you guys rock! 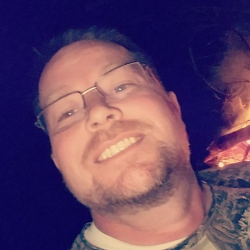